Deadlines is finally available! You can order it in paperback or Kindle form from Amazon, and if you live in this area, I have copies that I’ll be glad to sign for you.
It’s been a long journey but this part has finally come to fruition. Of course, I already have rough drafts of several stories for my second book. You can expect more crime stories, but also more from Tahlequah and the fascinating people I encountered there.
After a holiday hiatus, my local writers group is about to start meeting again at the historic Kindall Store in Olga, Mo. I’ve missed comparing notes with them and welcome the chance to exchange ideas every week. Writing groups really do help.
Deadlines chronicles many of the experiences I had while writing for three newspapers in Oklahoma over 35 years.
News keeps happening, and I expect to keep my book current. I already have updated the Kindle edition to reflect that a woman known only as “Daisy Doe” since her body was discovered in 1988 in the Grand River has been identified. I was astonished to discover she was Jeanetta Coleman, once the common-law wife of Charles Troy Coleman, the killer whose execution I witnessed in 1990. Coleman could not have killed her, as he had been in prison since 1979. Chapter 11 of Deadlines covers his story and the execution.
I also revised the Kindle version after the parole hearing for Tom Cartwright, another killer whose story begins the first chapter of Deadlines, to reflect that he remains in prison. He will be up for parole again in three years, but the DOC lists no release date for him. I’ll also make changes to the paperback version of Deadlines periodically as required, and will publish notices of the updates on my pages.
Thanks in advance to all who purchase and read Deadlines. Please let me know what you think of it. 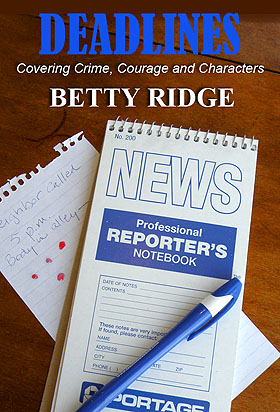